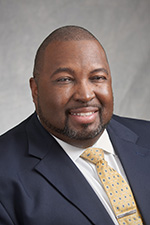 Worcester, MA – February 16, 2021 – Rockland Trust recently appointed G. Warren Manigault III as Vice President, Regional Manager for the Worcester Market in their Retail Banking Division. In this role, Warren will be responsible for developing, growing, and overseeing the Worcester Market branches. Warren will also be the branch manager for Rockland Trust's Shrewsbury branch located in the Lakeway Commons at 193 Boston Turnpike on Route 9, opening in early spring.

Warren has 24 years of experience working in sales and business development, with the last ten years in the Worcester County banking industry. Before joining Rockland Trust, Warren was an Assistant Vice President and Senior Branch Manager at Webster Five Cents Savings Bank, overseeing their Worcester branch and the floating banker teams. During his time there, he played an integral role in the opening of their new flagship location on Front Street in Worcester. Warren also was an Assistant Vice President and Small Business Relationship Manager at Santander Bank. He was responsible for prospecting and acquiring new customers and serving as the primary liaison between business customers and the bank.

Warren holds his Bachelor of Science Degree from Roger Williams University with a dual major in Social and Health Services. He also has a Project Management Certificate from Bryant University and his Masters of Business Administration from Fitchburg State University.

In his spare time, Warren serves as the Senior Pastor of Candleberry Chapel and volunteers as the Finance Committee Chair and Board Treasurer for Edward M. Kennedy Community Health Center. He loves to cruise internationally with his wife Julie and daughters Adrianah and Anjolique and ride his vintage Harley Davidson throughout New England's roads.

About INDB and Rockland Trust

Independent Bank Corp. (NASDAQ Global Select Market: INDB) is the holding company for Rockland Trust Company, a full-service commercial bank headquartered in Massachusetts. Rockland Trust was named to The Boston Globe's "Top Places to Work" 2020 list, an honor earned for the 12th consecutive year. In 2020, Rockland Trust was ranked the #1 Bank in Massachusetts according to Forbes World's Best Banks list. Rockland Trust has a longstanding commitment to equity and inclusion. This commitment is underscored by initiatives such as Diversity and Inclusion leadership training, a colleague Allyship mentoring program, numerous Employee Resource Groups focused on providing colleague support and education, reinforcing a culture of mutual respect and advancing professional development, and Rockland Trust’s sponsorship of diverse community organizations through charitable giving and employee-based volunteerism. Rockland Trust is deeply committed to the communities it serves, as reflected in the overall "Outstanding" rating received in its most recent Community Reinvestment Act performance evaluation. Rockland Trust offers a wide range of banking, investment, and insurance services. The Bank serves businesses and individuals through approximately 100 retail branches, commercial and residential lending centers, and investment management offices in eastern Massachusetts, including Greater Boston, the South Shore, Cape Cod and Islands, Worcester County, and Rhode Island. Rockland Trust also offers a full suite of mobile, online, and telephone banking services. Rockland Trust is an FDIC member and an Equal Housing Lender. To find out why Rockland Trust is the bank "Where Each Relationship Matters®," please visit RocklandTrust.com.