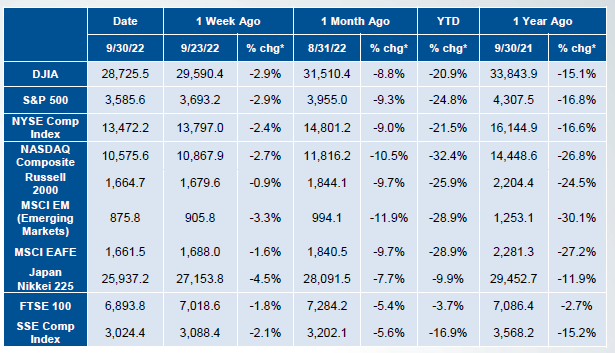 U.S. markets reversed July’s gains with the S&P 500 closing down -4.2%. The Dow was down -4.1% and NASDAQ was down -4.6%. Broadly speaking, markets continued to have concerns around negative earnings revisions, uncertainty around possible September ramp up in quantitative tightening by the Federal Reserve (Fed), China, and the emerging European energy crisis due to Russian oil dependency.
Initially, the market rallied in the first half of August on hopes of peak inflation passing with reassuring economic data (flat July CPI reading and lower PPI due to slowing energy prices). However, the narrative shifted after the Jackson Hole meeting at the end of the month when the Federal Reserve turned a hawkish tone to continue the fight against inflation. As a result, there are expectations of an interest rate hike of 0.75% at the upcoming September FOMC meeting, followed by a 0.50% increase in November and then a 0.25% rise in December. This changed previous expectations of potential rate cuts.

All eyes are on the Fed’s policies in the upcoming September meeting, how global central banks will fight rising inflation and alleviate concerns of slow growth (exacerbated by the European energy crisis as colder weather approaches the region) and consumer spending as the holidays approach.
Most of the U.S. equity sectors closed lower with Tech -6.1% (semiconductor weakness), Healthcare -5.8% (pharma and medical technology weakness), and Real Estate -5.6% leading the losers. Energy +2.8% and Utilities +0.5% were the only gainers, despite energy prices’ third straight month of declines.
Developed International Equities (MSCI EAFE) reversed last month’s gains and closed lower -5.0%, while Emerging Market (MSCI EM) closed flat. Global concerns in Europe were elevated with the ongoing Ukraine war and looming energy crisis. The Eurozone’s 2Q GDP grew +0.7% QoQ despite the German economy being the most dependent on Russian gas imports. However, Eurozone inflation increased to record highs of 9.1% YoY in Aug, up from 8.9% in July, above the 9.0% consensus. Elsewhere,
China reported contracting manufacturing PMI data of 49.4 in Aug, up from 49.0 in July. 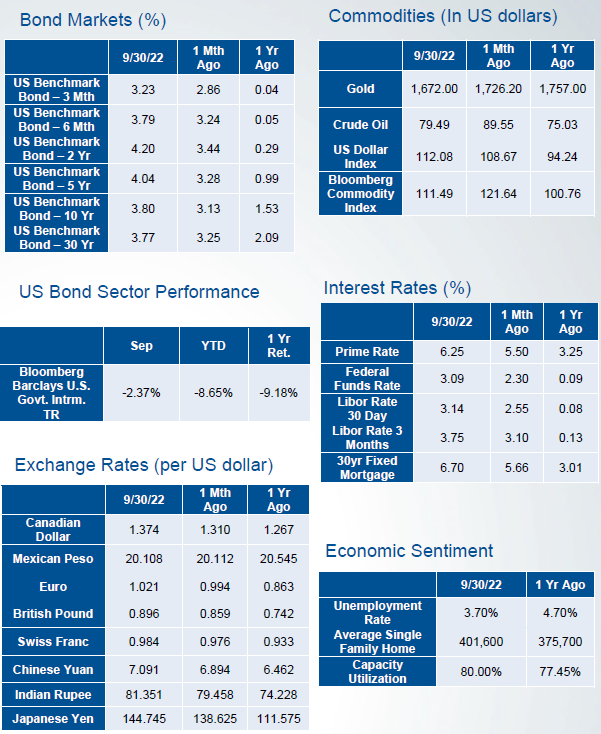 The U.S. yield curve stayed heavily inverted as rates climbed this month on the back of resilient U.S. economic data and the Fed’s continued stance on fighting inflation. The 2-Yr note rose to 3.44% and at one point topped 3.50% to hit its highest level since 2007. The 10-Yr rose to 3.13%, and the 30-Yr to 3.25%.
The Bloomberg Commodity Index ended the month slightly lower -0.2%. WTI crude oil continued to pullback for the third month, closing down -9.2% to just below $90/barrel, while Brent falls to $96/barrel. Gold closed lower again, down -3.1%.
*Performance for world indices represents price returns (excluding dividends) for the DJIA, S&P 500, NASDAQ, Russell 2000, MSCI EM, MSCI EAFE, NYSE, SSE, and Nikkei, due to data availability.
Not Insured by FDIC or Any Other Government Agency / Not Rockland Trust Guaranteed / Not Rockland Trust Deposits or Obligations / May Lose Value