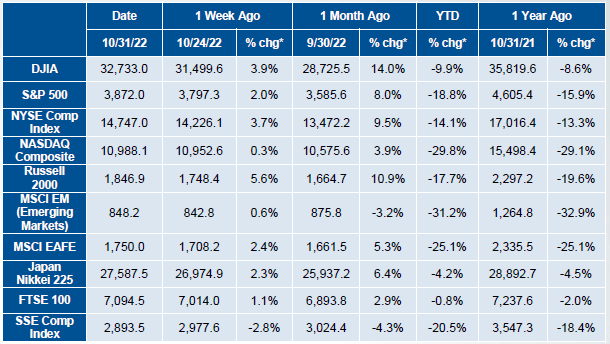 U.S. markets reversed last month’s losses and closed higher in October with the S&P 500 +8.0%, the Dow +14.0% (best month since 1976), and NASDAQ +3.9%. Markets climbed after better than expected third quarter earnings, signs of peak inflation resulting in optimism for slower and lower rate hikes by the U.S. Federal Reserve (Fed) in the upcoming months, and a lack of escalations in the Russian war against Ukraine.
The Fed’s tightening monetary policy via rate hikes to keep inflation at bay continued to drive market sentiment. Inflation was still well above the Fed’s 2% target as September CPI reported higher than expected at 8.2% YoY and PPI at 8.5%. However, as demand weakened, supply chain issues eased, and some metrics like shelter have softened recently, there were hopes that inflation will come down. As a result, the market priced in a 75 basis points (bp) rate hike for November and potentially a 50 bp hike for December. 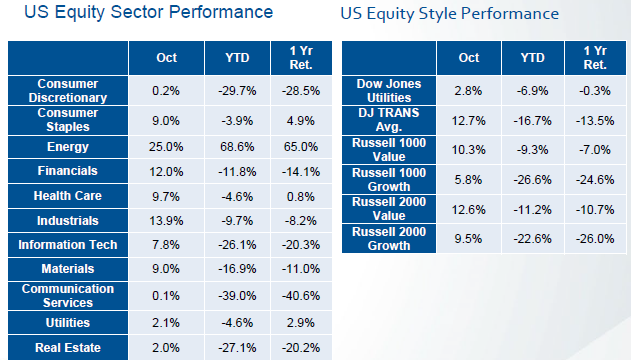 Third quarter reported a blended earnings growth rate of 2.2% (lower than the 2.8% expected), highlighting currency headwinds, mixed updates on supply chain pressures, still high materials costs, and mixed signals on consumer spending. However, 69% of reports so far have beat estimates.
In the remaining months of 2022, the European energy crisis, the Fed’s monetary policies and its impact, global inflation, and third quarter earnings remain in focus.
All of the U.S. equity sectors closed higher this month led by gains in Energy +25.0%, Industrials +13.9%, Financials +12.0%, and Healthcare +9.7%; while Consumer discretionary -0.2% and Communications +0.1% closed flat. 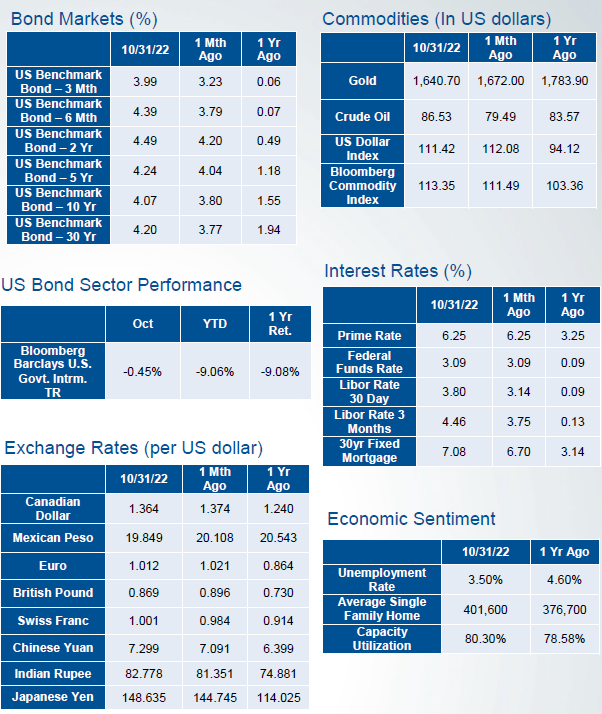 Developed International Equities (MSCI EAFE) closed higher +5.3%, while Emerging Market (MSCI EM) closed down -3.2%. In China, the RMB fell to its weakest level against the USD since 2008 after President Xi consolidated power with a third term. Markets interpreted this as further adherence to zero Covid policy, which is less favorable to businesses. In the U.K., markets were in turmoil after the Truss administration unveiled a surprise fiscal stimulus budget, which was then calmed by BoE support and the ushering in of a more fiscally prudent government under Rishi Sunak. The ECB announced another rate hike of 75 bp.
The U.S. yield curve remained slightly inverted as rates climbed further this month on the back of the Fed’s continued stance of raising rates to fight inflation. The U.S. 2-Yr note rose to 4.49%, the 10-Yr rose to 4.07%, and the 30-Yr rose to 4.20%.
The Bloomberg Commodity Index rose +1.7%. WTI crude oil broke four months of decline and closed up +8.9% at $86/barrel, while Brent rose to $94/barrel. Prices will likely continue its rebound as OPEC+ cut combined production quotas by 2.0M bpd beginning in November. Gold closed lower again, down -1.9%.
*Performance for world indices represents price returns (excluding dividends) for the DJIA, S&P 500, NASDAQ, Russell 2000, MSCI EM, MSCI EAFE, NYSE, SSE, and Nikkei, due to data availability.
Not Insured by FDIC or Any Other Government Agency / Not Rockland Trust Guaranteed / Not Rockland Trust Deposits or Obligations / May Lose Value
Investments in stocks, bonds, mutual funds, and other securities are not bank deposits or obligations, are not guaranteed by any bank, and are not insured or guaranteed by the FDIC (Federal Deposit Insurance Corp.), the Federal Reserve Board, or any other government agency. Investments in stocks, bonds, and mutual funds involve risks, including possible loss of principal.