The Markets & the Economy - What We're Watching:

According to the Wall Street Journal’s latest survey of economists, the probability of a recession in the next 12 months is 63%, up from 49% in July’s survey. It is the first time the survery pegged the probability above 50% since July 2020, in the wake of the last short but sharp recession (WSJ). However, it is important to understand what a recession is and how they have differed over time.

What is a Recession?

A recession is defined by the National Bureau of Economic Research (NBER) as a significant decline in economic activity that is spread across the economy and lasts more than a few months. While the financial press often states the definition of a recession as two consecutive quarters of decline in real Gross Domestic Product (GDP), only the NBER Business Cycle Dating Committee can formally declare a recession. The NBER Business Cycle Dating Committee is responsible for maintaining a historical chronology of U.S. business cycles and identifies the peak and trough months in economic activity. The committee considers three criteria: depth, diffusion and duration when making their analysis.

While the NBER Business Cycle Dating Committee relies on Gross Domestic Product (GDP) and Gross Domestic Income (GDI) measures to help determine the peak or trough of economic activity, they rely on additional data to determine if we are actually experiencing a significant decline in economic activity that lasts more than a few months (recession). As highlighted in the chart below, the additional factors are Total Non-Farm Payroll, Employment Level (Household Survey), Industrial Production, Real Manufacturing and Trade Industries Sales, Real Personal Spending, and Personal Income. While we have experienced recent declines in both GDP and GDI, the broader measures that the NBER Business dating Cycle Committee reviews are still somewhat mixed with several still showing positive growth over the last six months. 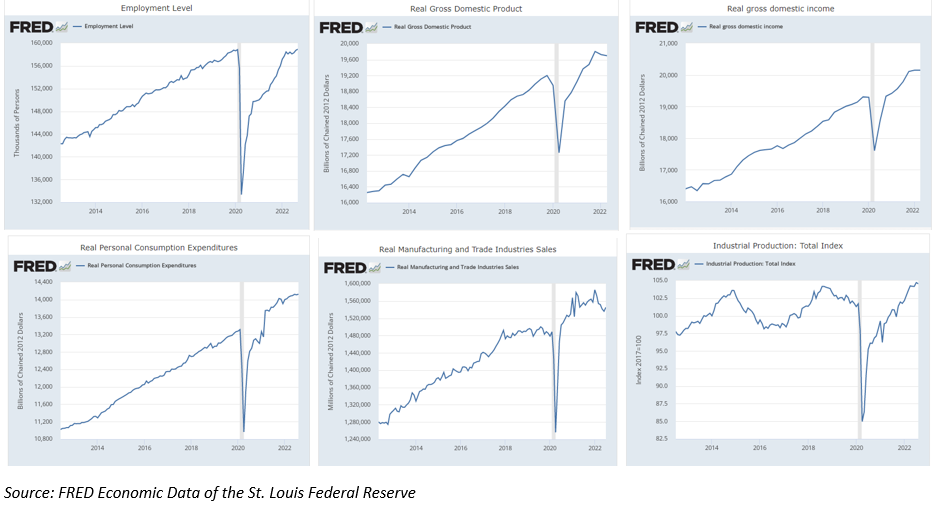 As seen in the chart below, since the Federal Reserve System’s creation in 1913 they have managed, with the exception of the Great Depression, to dampen both the severity and length of post-World War II recessions. We have experienced eleven recessions since 1948, an average of one recession every six years, with a typical duration of ten months. While we have recently experienced some stronger than normal economic recoveries, the average expansion, since 1912, has lasted 47 months while the average recession has lasted just 14 months. Periods of economic growth are varied and have lasted as long as a decade or as short as just over a year. 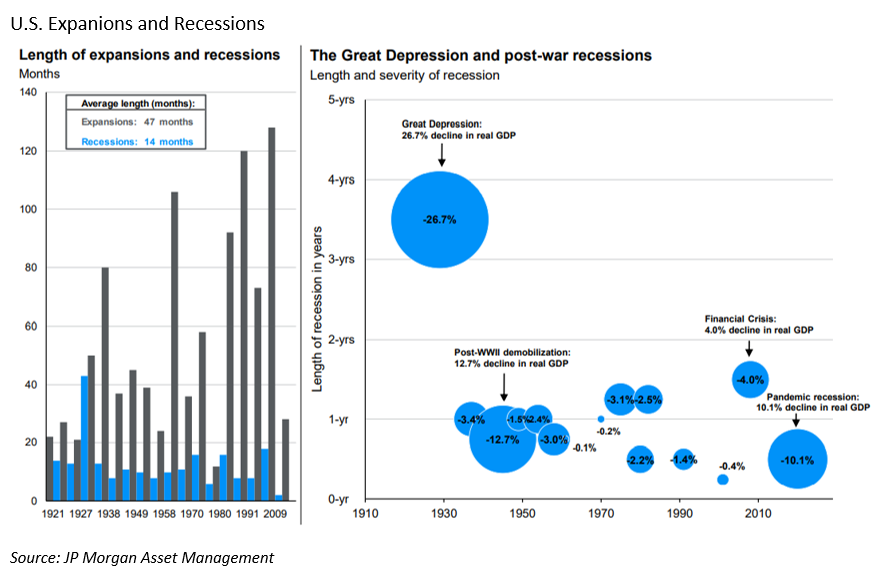 Since the stock market is a discounting mechanism, it is always looking forward, and prices are adjusting in anticipation of future events. Financial markets are oftentimes leading indicators whereas a recession is historically a backwards looking indicator. While we remain apprised of the current economic environment we remain focused on the long term and protecting portfolios on the downside.

As your investment managers we take a long term approach and believe that by minimizing risk through our disciplined asset allocation process clients can achieve the long-term results they seek.