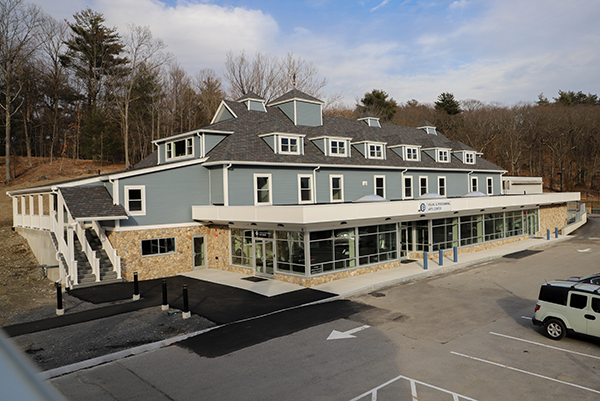 Boston, MA - February 21, 2020 - Rockland Trust Bank joined Chapel Hill-Chauncy Hall School (CH-CH) to celebrate the unveiling of the school’s enhanced and expanded visual and performing arts center, The Barn. The Bank provided $4.5 million in construction loans to CH-CH to finance the re-imagination of the historic building, which featured 9,000 square feet of additions, including a new theater, new music classroom space, expanded state-of-the-art studio spaces, MakerSpace, and a glass atrium gallery as part of the school’s Building Creativity campaign. The Rockland Trust Charitable Foundation also made a donation to the school and, in turn, a stairwell in The Barn was named in the Foundation’s honor.

“Rockland Trust is proud to have played a role in enhancing the learning and artistic opportunities offered to students of Chapel Hill-Chauncy Hall at The Barn,” said Gerard Nadeau, President and Chief Commercial Banking Officer at Rockland Trust. “Education and creative expression are key components of building strong communities, so this project was of tremendous importance to The Bank and our mission.”

Considered a central part of the CH-CH experience, The Barn supports students’ creative enterprises in studio arts, theater, and music. The upgrades to the facility also include a modern Mac-based digital arts lab, musical instrument practice spaces, and a professional sound and lighting booth. The re-imagination of the building will create expanded opportunities for faculty and students, as well as collaboration with schools and organizations beyond CH-CH. The now 22,000 square foot facility will also provide additional classroom space and further interdisciplinary connections that complement the school’s signature focus on teaching the way students learn. Plans for the re-imagination of The Barn began in 2015 and the project broke ground in 2018.

“The Chapel Hill-Chauncy Hall community is grateful for Rockland Trust’s support of the Building Creativity program, both for providing the financing and also contributing to fundraising for The Barn,” said Gwen Pojasek, Chief Financial Officer for Chapel Hill-Chauncy Hall School. “We are thrilled to be providing our students with the space and the technological upgrades to enhance the artistic component of their CH-CH education and look forward to the performances and showcases to come at The Barn.”

Rockland Trust’s Commercial Banking Group has more than 50 commercial lenders and 17 lending centers throughout Massachusetts and Rhode Island. With a lending capacity over $100 million, the Commercial Banking Team has broad experience in areas such as asset based lending, commercial real estate, construction and land development, equipment financing, commercial mortgages, tax-exempt bond financing and low income housing loans. In addition, the team can meet all the financial needs of its customers with additional services such as business deposit products, merchant and foreign exchange services, and cash management services.

Independent Bank Corp. (NASDAQ Global Select Market: INDB) is the holding company for Rockland Trust Company, a full-service commercial bank headquartered in Massachusetts. Named in 2019 to The Boston Globe’s “Top Places to Work” list for the 11th consecutive year, Rockland Trust offers a wide range of banking, investment, and insurance services.  Rockland Trust serves businesses and individuals through approximately 100 retail branches, commercial and residential lending centers, and investment management offices in eastern Massachusetts, including Greater Boston, the South Shore, the Cape and Islands, as well as in Worcester County and Rhode Island. Rockland Trust also offers a full suite of mobile, online, and telephone banking services. Rockland Trust is an FDIC member and an Equal Housing Lender. To find out why Rockland Trust is the bank “Where Each Relationship Matters®”, please visit www.rocklandtrust.com.