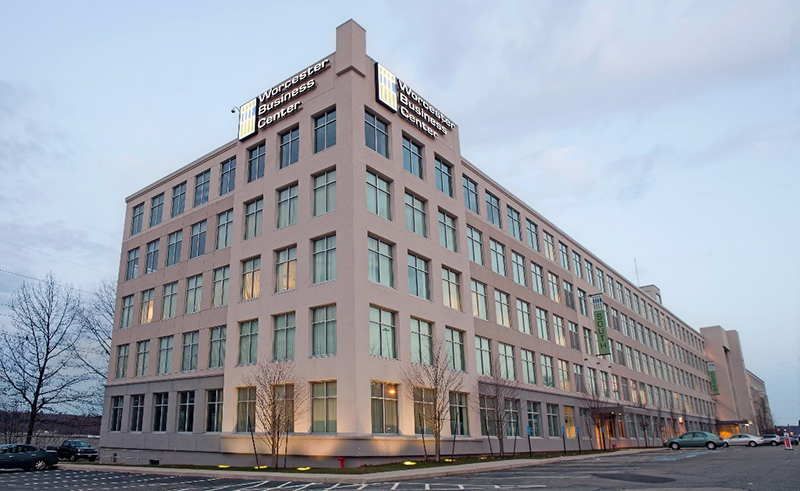 Worcester, MA – September 23, 2020 – Rockland Trust announced today it has provided $20.4 million in financing to the Worcester Business Center (WBC), which offers 270,000 square feet of premiere office property conveniently located in the hub of Central Massachusetts. Developed and managed by Franklin Realty Advisors, the WBC is recognized as one of the largest multi-tenanted urban office buildings in the City of Worcester. The additional capital provided by Rockland Trust will be used to complete a last round of tenant improvements and lease the remaining 11 percent of office space.

“Rockland Trust continues to believe in and invest in Central Massachusetts. The refinance of the Worcester Business Center is one of our largest, most significant financing investments in the Central MA market, further demonstrating our commitment to supporting Greater Worcester,” said Peter Staiti, First Vice President and Worcester Commercial Lending Center Manager at Rockland Trust. “We were impressed by not only the diversity of the tenants at the WBC, but also the strength of management and the long-standing leases that keep the building at near-capacity. We look forward to maintaining our working relationship with Franklin Realty Advisors in the future.”

Originally designed for manufacturing, the complex at 66 & 67 Millbrook Street was home to Thom McAn Shoe Corporation from 1965 to 1996 before its closure and redevelopment into the WBC. Current ownership for the WBC has invested over $14.8 million in improvements over the past decade, including the transformation of more than 100,000 square feet of existing warehouse space into office space. Occupying space at the WBC are three of the largest office tenants in Worcester: UMass Memorial Health Care, Elder Services, and the Massachusetts Department of Revenue.

“This final push from Rockland Trust provides us with the funding we need to fill the WBC, with confidence that the City continues to thrive and serve our businesses and community members,” said Charles ‘Chip’ Norton, Franklin Realty Advisors LLP, and Managing Director. “We appreciate the shared vision and commitment to Worcester from Rockland Trust and the local consortium of investors that have contributed to the growth of the WBC. At the end of the year we brought in a new investment group, primarily local investors who contributed 2.4 million which was used to buy out the original majority investor. The Rockland Trust refinancing completed the second step of the recapitalization of the project.”

Following the opening of Rockland Trust’s Commercial Lending & Investment office at 100 Front Street in 2018, the Bank has prioritized development in Worcester and identified the Central MA market as a key area of growth. Additionally, Rockland Trust opened its first retail branch in Worcester at 301 Grove St. earlier this year and plans for a second branch opening this fall.

Franklin Realty Advisors LLC is a regional real estate development and advisory firm headquartered in Wellesley, Massachusetts with specific expertise in public/private partnerships and historic preservation projects. Over the past few decades the managing directors and senior management of the firm and its affiliates have developed, acquired and/or managed over $750 million of real estate projects throughout the United States, including more than $200 million in office and mixed-use projects in Central Massachusetts. Some significant local projects include the $100 million Southbridge Innovation Center, $90 million Mercantile Center project in downtown Worcester, as well One and Two Chestnut Place in Worcester, The Worcester Business Center and 385 Grove Street in Worcester.

The building ownership consists of a group of highly sophisticated real estate investment professionals with ties to both Boston and Worcester. The building was developed and is managed by Franklin Realty Advisors, LLC a full service real estate development and advisory firm headquartered in Wellesley, Massachusetts with specific expertise in public/private partnerships and historic preservation projects throughout the United States. The company, formed in 1988, offers the highest quality services necessary for the planning, acquisition, development, construction, financing, marketing and management of diverse real estate assets. The marketing and leasing for the building is handled by Kelleher & Sadowsky which has been serving the Worcester and Central Massachusetts commercial real estate market since 1981. Since then Kelleher & Sadowsky have earned a reputation as the area’s premier commercial real estate company by forging strong relationships with landlords, tenants, and a wide network of business leaders. They have consistently achieved outstanding results for its clients while conducting business with the utmost integrity.

Independent Bank Corp. (NASDAQ Global Select Market: INDB) is the holding company for Rockland Trust Company, a full-service commercial bank headquartered in Massachusetts. Named in 2019 to The Boston Globe’s “Top Places to Work” list for the 11th consecutive year. In addition to this recognition, Rockland Trust was ranked the #1 Bank in Massachusetts according to Forbes 2020 World’s Best Banks list. Rockland Trust offers a wide range of banking, investment, and insurance services. Rockland Trust serves businesses and individuals through approximately 100 retail branches, commercial and residential lending centers, and investment management offices in eastern Massachusetts, including Greater Boston, the South Shore, the Cape and Islands, as well as in Worcester County and Rhode Island. Rockland Trust also offers a full suite of mobile, online, and telephone banking services. Rockland Trust is an FDIC member and an Equal Housing Lender. To find out why Rockland Trust is the bank “Where Each Relationship Matters®”, please visit RocklandTrust.com.