Ode to the Quahog

CAPE COD, MASS. - How a pair of gritty New Englanders built a small restaurant empire one mud-covered clam at a time.
Erik Bevans was tending bar one winter night in a small Brookline pub, explaining to a late-night regular that he wasn’t just an everyday barkeep. He had a real career, seasonal, running a small eatery on Cape Cod.
“I told him it was a small mom and pop operation and that we were just a bunch of quahoggers trying to get along,” Bevans recalls. “I said we were living in quahog nation.” The barfly enjoyed the reference, but amended it.
“No, down there it would be a republic, the Quahog Republic,’” he responded.
“It was around two o’clock in the morning and after about three or four scotches, but he came up with a name that stuck in my head,” says Bevans.
Bevans and his partner Tom Hughes (who Bevans jovially calls a “washashore,” a slightly pejorative term for anyone not born on the Cape) soon launched the real Quahog Republic, beginning with T-shirts emblazoned with the name and events designed to express and broadcast “the quahog culture.”
Their journey has been a master class in small business success, from starting small and investing wisely, to expanding in the right markets and building employee loyalty, all while never losing sight of your core mission and identity.
Today there are four cozy Quahog Republic restaurants along the South Shore and inner Cape. Bevans and Hughes are preparing for what they think will be their best summer ever serving up signature “Crunchy Cod Fish and Chips” (made with cornflake and almond batter), “Monsta Lobsta Rolls,” and chowder, all while paying homage to the lowly quahog with other stuffed, sautéed, and raw offerings.
For the two restaurateurs, the image and message they send with their food and service transcends business and is classic New England.
“We are salty, coastal New England people,” Bevans, 41, says of his co-workers and clientele. “Some of the best people you’ll ever meet; the warmest, heartiest people in the world." 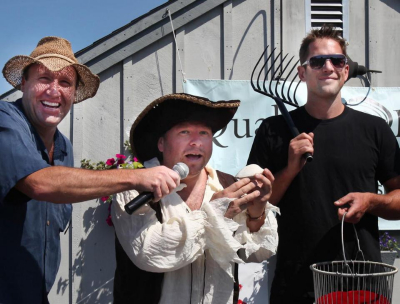 "It really is a republic; The Quahog Republic.”

Consider the quahog. A marine bivalve of many names — the hard clam, the round clam, the hard-shelled clam, and Mercenaria mercenaria, scientifically speaking. Plus, several gentile-sounding varieties based on its age or development — the cherrystone, the littleneck, the count neck, the top neck (but not steamers. Those are soft-shelled clams and, as any true Yankee knows, definitely not quahogs).
Though they can be found in the sea everywhere from Prince Edward Island to the Yucatan Peninsula, they are decidedly New England, rooted in Cape Cod and Narragansett Bay lore. Few people outside of the region ever use the word “quahog” and everyone seems to have their own pronunciation (correct is “ko-hog"). Fewer still would know what to do with one if it landed on their plate.
Bevans and Hughes not only know how to find, dig, clean, and cook the clams, but they also hold a deep cultural appreciation for the little bivalves. “Not to get all geeky, but they are some of the oldest living animals on earth,” says Bevans. “Some can live up to 400 years old.”
The first Quahog Republic restaurant opened in Falmouth in 2010. Now called The Dive Bar, it set an intimate, authentic standard for the Republic’s values.
“We had some success early on and were able to build off that and it’s been great,” he says. “People would say, ‘Why do you call it the Dive Bar?’ and I’d say, ‘Have you ever been there?”” All of the locations — the Dive Bar, the Waterfront Eatery in Onset, the Whaler’s Tavern in New Bedford, and the soon-to-be Captain’s Den in Plymouth — operate with the same menu staples, with varied appetizers, drinks, and small dishes.
“I’d say maybe eight of the items on our menu account for 40 to 50 percent of our sales,” Bevans says. “But each location is somewhat different. We look for locales that aren’t saturated with something similar and then we look at how to make ours stand out. Each has their own distinct name, but belong to the republic.”
Bevans and Hughes have been particularly adept at finding locations that attract locals and outsiders.
“We love small places,” Bevans says. “Our bar in New Bedford is only 49 seats. Onset is about 70 seats. They’re manageable when times are tough because we can run them with one cook and one server.” Bevans credits his staff for their success, some of whom have been with the pair for years.
“Our chef and director of operations for the four restaurants has been with us since he was 14 years old,” he says. “He’s 31 now. That loyalty and strength among our staff really is responsible for the success we’ve had growing and expanding.”
Bevans started his career cooking at a place called the Flume Restaurant in Mashpee, where the local owner, a Wampanoag, schooled him on authentic New England cooking techniques.
“He told me things like you didn’t need anything in a lobster roll except lobster and a dash of mayonnaise,” Bevans said. “No celery, no seasoning. Let the sweet lobster speak for itself. And that’s our philosophy now.”
The Quahog Republic’s motto is “Live, Give, Relax,” and the restaurant’s website proclaims that an official citizen of the Quahog Republic must embrace each element in their everyday life.
The Republic involves itself in various events throughout the year that support local charities, including the annual Hog Off Fundraiser, which benefits the LIFE Scholarship for Falmouth High School seniors. Proceeds from Monsta Lobsta raffles are donated toward local charities like the Falmouth Military Support Group, and it holds charitable drives each holiday season to benefit needy children and local troops.
“I always say to my friends and family, ‘What kind of life do you want to live?’” he says. “Well, I’ve always wanted to do this, and you can’t be afraid to live your vision so long as you’re willing to put in the work. We’re still working 70 hours a week, going full speed ahead. But it’s worth it.”