Sand Jewelry Business Is Creating a Wave of Excitement

BOSTON, MASS. - Holly Daniels Christensen grew up on the Outer Cape, where epic beaches drew her regardless of the season. Given that attraction, sand was a logical medium for her to express a lifelong interest in jewelry and fashion.

“Sand is such an integral part of the Cape Cod experience,” said Christensen. “All summer long you’re surrounded by the hustle and bustle of the beach. Then in winter, the beach is a place for solitude and reflection.”

Some years ago, Christensen’s best childhood friend had the idea of making holiday ornaments using sand collected from local beaches and asked her to help her. This got Christensen’s creative juices flowing.

“I thought to myself, ‘Instead of a special occasion item, why not craft jewelry that contains sand so that people can have a year-round keepsake that reminds them of the beach where the sand was collected?’”

This was the aha moment that eventually helped her launch the aptly named Dune Jewelry, which today brands itself as, “The Original Beach Sand Jewelry Co.”

Not yet six years old, Dune Jewelry, Inc. in Hyde Park, has been named “Woman-Owned Business of the Year” for both Massachusetts and the six-state New England region by the U.S. Small Business Administration (SBA).

The state and regional awards, which are presented annually by the SBA, recognize female entrepreneurs for developing growing businesses. Christensen’s company fashions handmade jewelry using sand and other organic materials. Her narrative, like so many others, is emblematic of a classic SBA theme: “Dream big, start small.” 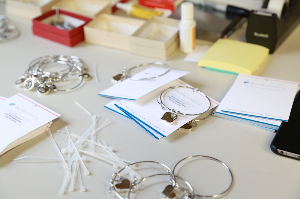 “Holly’s is an amazing story,” said Robert Nelson, the SBA’s district director for Massachusetts. “She started Dune really as just a hobby and now has built a business with enormous growth potential.”

Since formally launching the business in 2010, Christensen has grown Dune from three boutiques to more than 600 retail partners around the world. In 2015, the company had its best year ever, doubling its seven-figure revenues from the previous year.

Not bad for a company that was born on the kitchen table of Christensen’s then- home in Dedham.

“I completely ruined that table—to the great ire of my dear husband,” said Christensen. At his urging, the jewelry-making operation was soon moved down to the basement. That provided more workspace, but, just as importantly, it allowed Christensen to hire her first employee because the cellar had a separate entryway.

Today, Dune Jewelry has a total of 30 employees and occupies 2,000 square feet of loft space in a converted factory in the Readville section of Hyde Park.

The company uses beach sand, clay, earth, and other natural elements from thousands of locations around the world to create handmade necklaces, earrings, bracelets, cuff links, and other items.

On her left wrist, Christensen wears an attractive gold-toned watch. The black bezel surrounding the watch face is made from Positano Beach sand, collected on her honeymoon on the Amalfi coast in Italy. Dune expects to offer this watch product later this year.

“We don’t just sell jewelry,” she said, “we sell memories.”

Christensen started out making sand jewelry for her friends and family. She branched out by going to arts-and-crafts shows on the Cape and selling her items from small kiosks. After a while, a few local boutiques and gift stores got interested in her products.

“It just all of a sudden started to catch on,” said Christensen.

She formally established Dune Jewelry, Inc., in late September 2010. A little over three years ago, she teamed up with Rick Blank, a retired manufacturing executive, who became her mentor as part of SCORE, the Service Corps of Retired Executives. Blank’s first piece of advice: “Get out of your house.”

The idea of moving the operation elsewhere was immediately scary to Christensen. “We were operating literally paycheck to paycheck,” she recalled. “I was still working in real estate in Brookline and using commission checks as operating capital. To actually take on rent as an additional expense was a terrifying prospect.”

But she took Blank’s advice, found space in the converted factory building in Readville, and it was “absolute, 100-percent fate,” said Christensen.

It’s a great location for her on-site staff of 21, about half of whom take public transportation, and it allowed the company to scale up its sales and manufacturing capacity.

It was Blank who nominated Christensen for the SBA’s 2016 “Woman-Owned Business of the Year” award.

As sales exploded in fiscal 2015, the firm’s accountant advised that Dune couldn’t sustain the expansion without an injection of working capital. It was shortly thereafter that Christensen invited Rockland Trust business lender Itamar Chalif to come visit her operation.

“Rapidly growing businesses often run out of cash,” Chalif said. “This was not necessarily the case with Dune, which was generating a decent cash flow when we met with Holly. But she also wanted to double the company’s sales again. That’s when we came in with an injection of working capital to help take Dune to the next level.”

There were two other catalysts that helped propel Dune. One was hiring a marketing consultant who helped fine tune the company’s website and generate greater e-commerce activity. The other was to expand the company’s participation in jewelry trade shows, something Christensen had up to that point been unable to do because of a temporary health issue. During the past year, Dune attended several major trade shows and picked up 100 new accounts, according to Christensen.

Dune products are now found in stores on the East Coast from Maine to Florida. One of the largest accounts is The Paper Place, a specialty gift chain with multiple locations across New England. Dune has recently begun generating growing sales in the Caribbean, California, Michigan, and the Canadian Maritimes. Through its website, Dune also ships products to individual buyers in the United Kingdom and Australia.

One relatively near-by retail location is at the International Tennis Hall of Fame in Newport, RI, where Leslie Thomas, director of retail, recently commissioned a line of jewelry from Dune that uses three different materials from the tennis world—grass, clay, and hard court materials.

Dune currently has an inventory of more than 2,500 sands, donated mostly by its customers, in what it calls its “Sandbank.” The sands come from around the world: from the hallowed beaches of Normandy and Iwo Jima to the black lava shores of Hawaii and the pink sands of Bermuda.

The product line is all handcrafted, made mostly of sterling silver, with each piece carrying a lifetime guarantee. “The last thing I ever want is a piece of Dune sitting broken in someone’s jewelry box. I want people wearing it every day,” said Christensen.

Dune’s customer base covers a broad spectrum. The core demographic for its unique line of collectible jewelry is women over 40, but through its use of social media platforms such as Facebook and Instagram, Dune has begun to catch on with younger buyers as well.

“Men love us, too,” Christensen said. “To be able to give a special keepsake to your mother, wife, daughter, or girlfriend.  The sentimental value of our products can be truly extraordinary.”

Prices range from around $40 to as much as $600. The “findings,’’ or blank components into which Dune’s “Sand Artists” put customers’ sand, are designed in the Readville headquarters, with 80 percent manufactured in Rhode Island and the remaining 20 percent made in China.

In the company’s early days, Christensen used to answer every phone call and email on her own. She would ship orders with handwritten notes to each buyer.

“Before I met my SCORE mentor, I’d worked at a lot of jobs and was really a hard worker. I just loved working,” said Christensen, who was on her own at 15 and often worked three jobs, like selling cell phones, liquor promotions, and bartending. But now that she has two preschoolers at home, Christensen admits that she’s started to slow down, if only a bit.

“Rick taught me how to work smart,” said Christensen.

The scale of the business today is far too big for Christensen to get involved in every detail. Analytics work better in guiding the company forward than the gut feel she used to navigate by. But she has no shortage of ideas for the future. “The difficult part is reining them in and trying to make them feasible.”

Plans for this year include attending two new trade shows, designing more golf tournament gifts, and new manufacturing procedures and protocols for greater efficiency. New operations manager John Domurad’s desk is the now-refinished kitchen table on which the company began. Today, the horizon is not just the U.S. market, but overseas.

“Fine jewelry makers tend to sell their products around the allure of precious stones. What we make is experiential jewelry,” said Christensen. “Not too far down the road, I see Dune disrupting the jewelry industry by changing people’s perceptions of what constitutes a precious piece of jewelry.

“Ten years from now,” she said, “I see us as the Tiffany [& Co.] of experiential jewelry.” 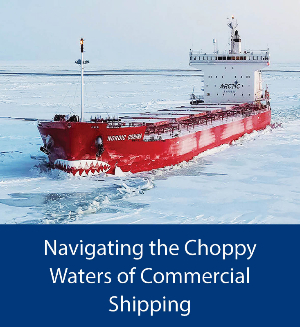 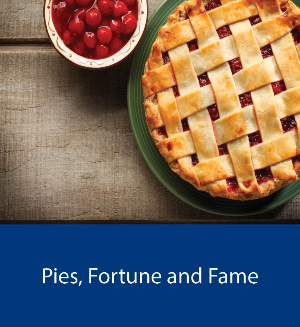