Constructing investment portfolios with a focus on a client’s long-term needs and concerns is only one important piece of the financial plan puzzle. At Rockland Trust Investment Management Group (IMG) we believe it is also crucial to keep a steady understanding of current market conditions and concerns to ensure our client’s portfolio's are appropriately allocated. While changing your portfolios allocation should largely be dictated by changes in your personal circumstances, it can be easier to maintain discipline through an understanding of the current market activity. Our IMG research team closely monitors market activity to ensure clients remain balanced and prepared for both the ups and the downs.

Some of the recent activities that not long ago fueled strength in the equity markets, we are now seeing as concerns. These include increased trade tensions between US and China, central bank interest rate shifts, and benign inflation. As of the middle of June, those three items have become serious investment concerns and as such, we are seeing common questions arise including:

1. Is a full blown trade war with China on the horizon?

There is no good time for a trade war. With the global expansion finishing its 10th year, the latest escalation in geopolitical frictions seems designed to fuel anxiety. A 25% tariff on all imports from China would be equivalent to a tax worth 0.6% of GDP, only part of which would be offset by an increase in farm aid. Together with a further hit to US exports from Chinese retaliation, the overall damage to the economy could be as large as 0.7% of GDP.

The Return of the Trade War 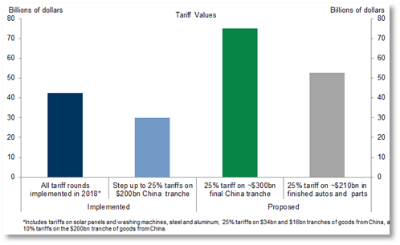 The step-up in the US tariff rate from 10% to 25% only applies to post-May 10 shipments (which typically take 2-3 weeks to arrive) and the Chinese retaliation won’t start until June at the earliest. The most likely scenario is negotiations between Presidents Trump and Xi continue without formally implementing any tariffs on the remaining USD 300bn of Chinese imports. Beijing may also need to give up its bid for the US to remove all tariffs at once and accept a partial unwinding of the levies. If both sides are willing to compromise, a deal would then be reached later in the year.

2. Does the yield curve inversion foreshadow a coming recession? 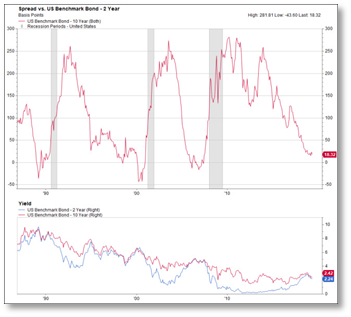 For the first time since 2007, the US 10-year Treasury note dipped into inverted territory. The yield curve plots the gap between long- and short-term US Treasury yields, and investors pay attention to it because the curve has inverted before each of the last seven recessions. In and of itself however, an inverted yield curve is not a foolproof recession indicator, nor does it predict a grim outlook for stock markets, especially since the 2-year to 10-year curve has not inverted. The curve inversion might be saying more about the global growth decoupling and the desynchronized nature of monetary policy, rather than a sign for future US growth. The current spread between the US and German 10-year bond yields of 2.48% is at a 30 year high, which is also helping to keep US 10-Year Treasury yields lower.

Our perspective is that this particular yield curve inversion on its own is something to monitor, and not a sign that it’s time to change your asset allocation. There are several other measures of equity risk including equity valuations, credit spreads, and corporate balance sheet quality that do not currently indicate a recession or bear market on the horizon.
Without confirmation from other risk signals, there’s a fair chance that the yield curve is sending a false alarm.

3. Whatever happened to inflation?

Inflation has been missing from the radar the past several years. Many thought that the economic growth and corresponding decline in unemployment would spur both price and wage inflation, but that has not happened. In fact, the reason why bond markets dramatically adjusted their expectations from US Federal Reserve interest-rate hikes to now expecting rate cuts is due in no small part to the lack of inflation. The market is not expected to price in further increases this year, or in 2020, for that matter. The Fed didn’t refrain from increasing interest rates because there is a growth problem - it halted hikes because of an inflation concern. There isn’t too much inflation or too much
deflation; could we be experiencing a Goldilocks economy?

Federal Open Market Committee (FOMC) members have strong concerns about inflation levels becoming too low. It is however, forecasted that the Fed will shift to a target inflation rate of 2.0% over the course of the next few years. The Fed won’t let inflation run wild, but investors should be comfortable with the idea of inflation staying around 2.5% for a while.

What to do amidst these uncertain times?

In our digitally centric world, we are always connected and inundated with information 24/7. Whether at home or on the golf course, on the news or in social channels, financial news and information is everywhere and easily accessible - and at times can illicit fear in investors. It can be challenging to look past temporary activities in the market or one way perspectives of an event and know what to do. While unsettling, market volatility is normal and part of the cycle and predicting short-term market directions with any frequency or certainty is virtually impossible. The surest way to ride out turbulent markets is to stay the course and together with your advisor, keep focused on your long-term goals.

Rockland Trust Online Banking gives you a variety of services that help you use and manage your accounts, whenever and wherever you want.

Rockland Trust gives you a variety of services that help you use and manage your accounts, whenever and wherever you want.